It’s often been said that the true measure of character is not simply found in adversity but in how a person reacts and responds to it.

Some people, during the second wave of the pandemic will, undoubtedly, surrender to fear and uncertainty, while others accept it and embrace it as an opportunity to do good deeds.

People may know Darryl Fletcher better from numerous television appearances, including his own shows as Kitchener’s ChefD.

ChefD is the quintessential celebrity chef for a number of reasons: he’s catered to celebrities from around the world and he’s appeared on numerous television shows across Canada including, but not limited to: CTV News at Noon Kitchener, CityTV’s Breakfast Television; CHCH Morning Live; Edmonton CTV Morning Live; and Kitchener’s Rogers Daytime among many more.

He also stars in three of his own television shows.

Currently, he is just completing Season 8 of At Home with ChefD. Then there is At the Cottage With ChefD (Season 3) on Rogers, and he’s just finished a new project for Bell Fibe, called The Hammertown Grill, which should be out sometime soon, he says. 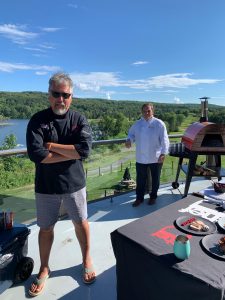 “I want to share my passion for cooking,” ChefD says, “but I also want to share (with viewers) the people that I get to meet; you know, the farmers, the butchers – the actual food producers – where people don’t normally see them on TV. That’s really kind of where we went. This season was the best yet because I got to interview a whole bunch of people involved in culinary tourism in Ontario and that was really cool.”

This goes back, he says, to two seasons ago when they did the same thing with farmers and even the great and wise ChefD has learned a thing or two from those food producers:

ChefD’s own recipe for success is simple: a dash of good humour followed by a splash of laughter; a good heaping of sincerity; all mixed together with a passion for food and for sharing what he knows about it with everyone.

He keeps it simple and the food always delivers taste as good as the dish’s original temptation.

“If you don’t make it easy,” he says, “people aren’t going to follow you and they’re not going to support you.”

ChefD is only interested in sharing recipes that everyone can use and make on their own, he says. On that note, he’s also written and published two cookbooks: Maple Madness and Garlic Madness.

“We’ve done two tours with Bonnie Raitt, two with Diana Krall and more tours with Blue Rodeo than I can remember,” he says. “I can’t tell you how many times I’ve catered for them.” 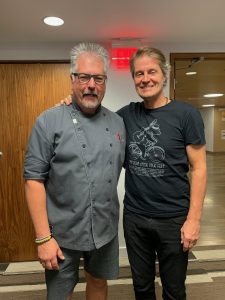 ChefD has met most of them in person, including his own boyhood hero, the Galloping Gourmet himself, Graham Kerr. ChefD recalls the early days of black and white television, watching Kerr do his cooking show, recalling how he could literally smell the food and taste it and thinking, ‘I want to be like him.’

“I actually got to meet him eight years ago,” he says. “He was truly very gracious with his time and shared some secrets (about how to do some things properly when you’re on TV).”

Fletcher started his career by graduating from the Chef program at Humber College and went on to serve as an apprentice in Toronto under Chef Roberto Arissa. Once the apprenticeship was done, he moved back to Kitchener, where he has worked with everyone from Weber’s Restaurants, M&M Meat Shops to Aqua Star North America and so on, eventually becoming Executive Chef at the Kitchener Memorial Auditorium (The Aud) and a corporate chef for Nutrafarms Inc.

ChefD and his recipes have been featured everywhere from Canadian Living, Foodservice and Hospitality magazine’s Chef’s Corner and – in case anyone has missed it – in this publication.

One recent concoction ChefD came up with was for Waterloo Brewery, called What Have You Done with my Radler?

Well, there doesn’t seem to be downtime these days, especially during Covid. Normally, Fletcher and his wife Tric would be off to Barbados for about 20 days in January but this year won’t pan out.

There is no downtime for one simple reason: “I love what I do so I don’t consider this work.”

ChefD has been doing another thing during Covid that comes naturally to him: giving back. Right now, the catering business is almost at a standstill with the pandemic and concerts, as well, are a no-go at this time so ChefD found something else to fill his time: filling other people’s bellies for the price of a lifetime – a sliding scale price where you “pay what you can.” 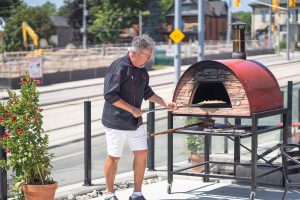 ChefD at the Real T Lounge in Kitchener, PHOTO: ChefD

“I’m a firm believer in giving back,” he says. “This community supported me throughout all of this, whether they watch me on TV or support our catering company and so on.”

They also have good corporate sponsors like Nutrafarms and Pillers Fine Foods, he says, that help out with supporting the initiative.

He laughs good-naturedly at the suggestion that he must be losing money on this venture. Just last week, he says, 100 meals were delivered with the help of his volunteers. Four people paid.

“I’m a Christian and you know,” says ChefD. “I’ve been given a lot of great blessings in my life, so this is an easy way to give back.”

Three people volunteer each Tuesday to deliver all the meals. They’ve even made deliveries to frontline workers in Cambridge, as well as the Region’s police headquarters, with help from Pillers who provided a ton of deli meat that wasn’t sold. They ended up making and delivering a whopping 12,000 sandwiches and 24,000 cookies.

As ChefD is doing his part to help others during Covid, he is well aware of the oncoming assault on the restaurant and catering industry in the area during this second wave and what it means for his business and other restaurants in the area.

The previous night, he says, he and his wife went out to a restaurant for dinner just to support another local restaurant.

“Everybody’s out getting like, kind of their last meal in before they can’t get anymore,” he says. “I just don’t know how some of those places are going to be able to make it through this time when they don’t have an income. The other thing is that this is Christmas Season and that’s our bread and butter. It gets you though January and February.”

Waterloo Region moved to the RED-Restrict classification of the Keeping Ontario safe and Open Framework on Monday, November 23.

“I think I’m going to have to lay off people for the first time in my career,” he says, while also gratefully acknowledging his cooking colleagues as the main reason he can accomplish so much. “I have an outstanding Chef Management team. My wife Tric, Chef Dale, Chef Darnell and Chef Aaron make my life easier.”

Some people may know ChefD from his downtown Kitchener establishment, The Real T Lounge, at 618 King St W.

At the height of his busy season, ChefD employs about 30 people on staff. Right now, he’s down to three full-time and five part-time staff.

As for other restaurant owners he believes they too are nervous and unsure of the future.

The future of the “pay what you can” project, however, will continue as long as possible and as long as there is a need.