Dan Albrecht was a man of few words but when he spoke, he meant what he said.

He also let his actions speak much louder than his own words, including charitable actions that likely helped many people in difficult times; actions that were rarely, if ever, mentioned publicly.

Rebecca Steckly, part-owner and the managing director at the Dreisinger Funeral Home in Elmira says Albrecht worked there as an assistant funeral director for 22 years. He passed away on December 2, 2020 at his residence in St. Jacobs at the age of 83. 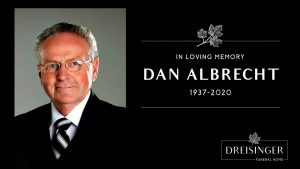 Steckly will dearly miss Albrecht and offered nothing but the highest accolades for the man she’d known for just five years since she took over the funeral home.

“He was just the best kind of person,” she says. “He was quiet. He was a good listener. He was very compassionate and he was very careful with his words; he was one of those people that thought before he spoke and when he spoke he meant what he said.”

Like so many others, Steckly recalls Albrecht had a gentle way about him. He was always composed and calm, which made his work at the funeral home such a good fit for him.

She also recalls his love for his family:

“He just had such a love for his wife (Muriel) and his family. You’ve never seen a man respect and love his wife like Dan. He loved Muriel.”

As for friendships, Albrecht was a natural.

“I guess he was friends with everybody he knew,” she recalls. “He was a great person to have working at visitations because he knew everyone, so people felt very comfortable coming in because they were coming in and seeing a friend rather than a strange face.”

That may have been part of his job but, for Dan Albrecht, it was also an innate part of his personality throughout his life.

Steckly says she was aware of Albrecht’s health issues but she never once heard him complain:

Steckly also says the couple had “wonderful children” and they were a “wonderful supportive family.”

He was simply one of those people that you could not spend much time with, she says, and not become his close friend because he was just one of those “very easy to love people.”

Each of the people who spoke about Albrecht at his private funeral service had pretty much the same sentiments about their father or grandfather, depending on who was speaking at the time.

Each one offered his or her own unique words they felt best described the man they’d all known and loved their entire lives. While it can be difficult to sum up one person’s life in a word or two, these family members did it quickly and decisively, simply because they weren’t telling anecdotes or stories – they were relating life experiences and little nuggets of truth about the man.

His youngest son Brent talked about his father’s, “deep love for the Lord” and that same love showing through to his children and his grandchildren the last couple of weeks. Being confined to his bed was not easy but he accepted it gracefully and you could tell he was at peace with about what the future held for him.

“He was ready for his final journey to his heavenly home,” said Brent, “and “I’m sure that last Thursday afternoon at about 12:40, there would have been quite a reunion in heaven at that point.”

Albrecht’s younger brother, Harold – Harold Glenn Albrecht was the Member of Parliament for the Conservative Party of Canada in the riding of Kitchener—Conestoga from 2006 until 2019 – recalls his brother’s silence in the face of his illness.

Harold recalls the last couple of months of Dan’s life as his health gradually declined and he lost his abilities.

“He never once complained about his condition,” says Harold. “He was very peaceful and very cognizant of what was going on.”

Even though Dan struggled to communicate because of the Parkinson’s, Harold says he never seemed to get frustrated. He always seemed to be at peace with himself and his situation and he was always gracious and thankful for a visit, Dan says.

“I called one night and his son was there,” Harold recalls, “and so they held the phone up to his ear. He could no longer speak at all, by the way, but he was changing his breathing and moving his head and (motioning) with is eyebrows so there was that sense of closure, that I released him. We all released him and he wanted to go. He was ready to go . . . to his heavenly home.”

There was no fear, Harold recalls. He also says it’s unfortunate that this had to happen during the Covid-19 pandemic because he has no doubt that – instead of a small, private send-off – there would have likely been hundreds of people at his funeral simply because he had so many friends.

His grandchildren who spoke at his service had their own special words for him. Grandson, Scott said a lot of words come to mind but he recalls especially that “grandpa was pretty steadfast and constant in his love for all of us.”

He recalls his grandpa’s kindness but also his sense of humour. Albrecht was noted for his love of telling a good joke or a one-liner and even playing innocent practical jokes on those around him.

Scott recalled how both his grandparents – Dan and Muriel – were his “most loyal” fans when he got into sports at a young age.

“I had an interest in baseball,” he related, “and grandma and grandpa would always take me out to the baseball diamond when I was really little and let me run the bases and slide into home and that’s the memory that will always stick with me for sure.”

It wasn’t something that stopped either because Scott later got into more sports and both grandparents were always at his games.

“They always wanted my schedule so they could come whenever they could to my games and long after my parents stopped coming to my games, (they) were still there.”

Trips to the local ice cream outlets with grandma and grandpa was also a regular thing.

“Grandpa was always there,” he recalled, “present in our lives and his love was never, ever in question.”

“Devoted” was the main word Scott chose to describe Dan.

He was devoted to his family, he said, and his work, his relationships with people, his volunteer positions and more.

“You literally could not go anywhere with grandpa without him seeing somebody he knew and he was always so excited to introduce us as his grandchildren and so proud of us, and this made us feel so loved and cared for.”

Grandson, Mitchell, recalled grandpa’s love of playing the jokester.’” He loved to make jokes and play around with you from pulling out his false teeth to scare me into making pillow forts.”

He recalled what his grandpa used to say when he was upset as a child: “He would always come over to me and say, ‘don’t pout or the birds are gonna poop on your lip.’”

Dan Albrecht was known as a man of faith and a man of prayer, a quiet listener with a great deal of integrity and always ready to offer a helping hand when someone was in need.

Albrecht did many different things in his life, from working at Schneider’s to driving a bus to running a hog farm, as well as his 22 years as a funeral director.

Brent remembered how he would have a pig butchered, cut and wrapped, to be loaded into the car and brought down to the Niagara area to give to a family that was in need. One brother recalls the time he was planning to go on a yearly trip to Oregon but the family car was broke down. Albrecht showed up at his brother’s door and told him he was taking his car to Oregon, just like that.

Albrecht was a man who was steadfast in his convictions which clearly reflected his religious faith, which never wavered right up to the end:

As Brent said, “I will always be grateful for his steady presence in my life.”

As Dan Albrecht neared the end of his life, his family stood by his bedside – while others used internet technology to be there.

“It was amazing to see God’s grace in action,” recalled Brent, as the family gathered around him to sing his favourite hymns and songs and read Bible verses. “On December third, dad caught the 12:38 p.m. flight and went home to be his Jesus. Love you dad.”

Dan Albrecht left behind his wife and best friend, Muriel (Sider) of 62 years, children – Kevan and Trudy, Lois and Scott Williams and Brent and Chris Albrecht. He was a proud grandfather to Darrell, Terry, Phillip, and Matthew, Mitchell and Matthew, Sarah and Chris, Scott and Brittany, Emily and Adam, Lily, Sammy, Lucy and Josie.

He was the brother of Delores Winger, Ruth Potteiger, Ron (Sharon), Harold (Darlene), and Dale (Judy), as well as many nieces and nephews and their families.

Dan was predeceased by his parents, Christian and Catherine, brother Ray and brothers-in-law.

Tipsy Scarf: A Unique Boutique with Something for Everyone