Residents making a trip to the dump will have to pay more for the first time in more than five years.

Starting April 1, The Region of Waterloo approved a fee hike at its transfer stations to a minimum of $10 per load. That fee is double the old charge which was implemented in July 2015.

The fee for garbage disposal is now $85 per metric tonne of refuse. Recyclables that are brought to the transfer station already separated from any garbage are charged at $42.50 per metric tonne, half that of garbage. The $10 minimum still applies, however.

Operations manager, waste management Mike Ursu says the new fee was implemented not only to bring the region in line with other municipalities, but to encourage residents and businesses to use the most cost effective and environmentally friendly method of waste disposal — curbside pickup.

Ursu said trucks are already on the street, using a route designed to be efficient. Residents choosing to bring their trash to the dump themselves are putting more vehicles on the street and more emissions into the air, he said.

“From a carbon footprint perspective, the truck is already driving past the home,” he said. “The general taxpayers pay for the curbside collection and that’s first and foremost the route we want people to take.”

The fee increase encourages residents who do choose to drop off their waste themselves to make less frequent trips by consolidating their loads. 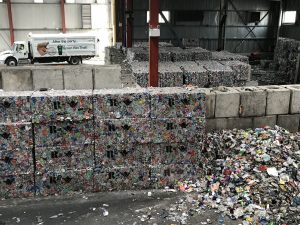 The new fee will also help off-set the cost of the waste disposal, pay for facilities and staff, and be invested for future capital projects as they arise.

“Over the years we’ve lagged behind other municipalities,” Ursu said.

Instead of incrementally increasing the rate by a dollar or two every year, the operations manager said the region chose to wait several years and increase it by five dollars at a time.

The region says it’s a misconception that items like appliances must be dropped off at the dump. Large items are covered under municipal property taxes and can be left at the curb.

Those disposing of more trash than limits allow can save themselves a trip or two, but won’t save themselves the fee by using curbside pick-up. Large items require tags that can be purchased from the region online. The tags are $10 per sheet and include five tags.

That works out to $2 per extra bag of trash. The region hopes the price difference will encourage those with just a few extra items to stay home, but those taking on large projects might find themselves spending as much or more than a trip to a transfer station.

Some items are still accepted free of charge, including hazardous household chemicals like motor oil and paint. The region is reminding people not to dispose of chemicals in the garbage and instead bring up to 25-litres a day of the properly stored hazardous waste to a transfer station.

As spring cleaning yards and gardening get under way, residents are reminded that items like leaves, clipping and grass are free to dispose of and there is no limit to the number of yard waste bags that can be left at the curb for pickup.

Even though the curbside collection is free, the region is still encouraging residents to consider using yard waste as compost or mulch in their own garden. Keeping the waste at home saves on fuel used to carry the waste to the dump and is more environmentally friendly.

Those bringing their yard waste to a transfer station on their own will be charged. The fee for yard waste is the same as that of recyclables and the new $10 minimum still applies.