For Katharina von Hugo the key to an environmentally friendly fuelling system for her 10,000 square-foot property is waste.

The co-owner of Heizomat Canada uses her own product, a boiler system running on wood chips and biomass waste, to heat her home and barn, helping to keep fossil fuels in the ground.

“Our systems are considered net-zero and the reason for that is because the fuel that we’re using is waste fuel, so we’re buying pallets that… normally they would be trucked away to a waste facility,” von Hugo says.

In addition to buying pallets or other inexpensive wood from local providers, she also collects and chips wood from her own property, fallen branches and trimmed treetops that would normally be left to decompose on the forest floor.

“Instead of decomposing in the bush we bring them out to burn. And now we’re pulling the heat out of that instead,” she said.

Waste is even kept to a minimum in preparing the fuel material because woodchips require less processing to get it to a burnable state.

“There’s plenty of worries in a business and then add the environment it can be quite overwhelming,” she said. “What we like about this particular system is that the environment gets to win while people are still making good business choices.” 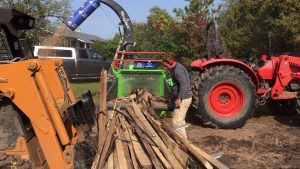 Burning cheaper waste wood for heat is not only a more sustainable option, but is cheap enough to keep costs down as well.

For those purchasing a unit but not knowing where to look for the less expensive, environmentally conscious options, Heizomat sources local fuel for their customers.

All of the fuel Heizomat sources for its customers is within a two-hour drive, adding to not only the savings, but keeping emissions from delivery vehicles out of the air. Building up local suppliers helps to support the local economy as well. 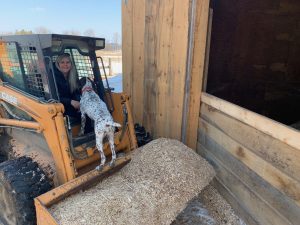 Emissions from delivery vehicles isn’t the only thing that concerned von Hugo. After spending years living in New Zealand where wood burning heating systems were common, even within city limits, the smoke wasn’t just a slight smell on a crisp fall or winter day, like Canadians may be used to.

“You were essentially living in a smog of wood smoke. You are actually emitting it into the air,” she said.

That exposure to large amounts of smoke emissions made it important to von Hugo that she pick a heating system that burned as cleanly as possible.

“Canadian Emissions Standards are very small and we’re at 50 per cent of that. All our boilers are certified to strict European Standards,” she said. “When you look at the smoke it’s purely white.”

The Heizomat systems were developed in Germany. While they’re primarily used on farms in Canada, in Europe the units are used to heat homes in urban environments.

“In Germany these systems are actually used in subdivisions and in town. Their systems are all over in town and right next to your neighbour. That’s when you know it’s clean.”

Von Hugo says the units they sell aren’t available for urban homes just yet, but they are expanding into places like Mississauga where businesses are looking toward a future that might require them to find a more sustainable way to heat their buildings and warehouses. 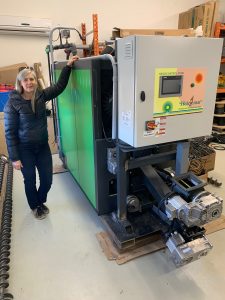 “This makes it possible for them to install this type of system and show off that they’re being ahead of the game,” she says.

Any cost-benefit analysis of a new heating system will always include not only the amount of money put into the system, but the amount of time as well.

Heizomat uses an auger to feed the chip or biomass material into the system and a computer to monitor it remotely. It even has a remote, automatic shut-off should it be necessary, making the system almost completely hands off.

“Customers enjoy more economical heat with the benefits of automation. Freeing them up from worry about expenses, labour time and giving them the freedom to walk away from the business and know the heating is taken care of,” says von Hugo.

A traditional wood-burning system requires owners to put in more time and energy than might be practical to make them a viable option for more urban-area businesses. Being hands off allows companies to consider a non-traditional, yet sustainable option.

For those looking to upgrade their current system to something more cost-effective while still taking care of the environment, Heizomat Canada can be reached at 1-877-359-0191 or by visiting their website at heizomat.ca.

What the Provincial Budget Means to You: A Synopsis by MPP Mike Harris