Running a business and struggling to survive during the Covid-19 pandemic isn’t easy for some small businesses these days, but one Wellesley entrepreneur has no intentions of losing the battle.

Before the pandemic, she was doing a thriving business with a staff of five.

She did have to lay off her staff but she was lucky that her espresso service was considered an essential service and so, she only had to endure a temporary shutdown and was able to reopen curbside.

Kirby did all the work of preparing for her reopening herself, which included sanitizing everything, reorganizing. 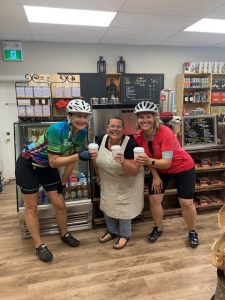 She ran the espresso service herself, Mondays to Saturdays from 8 a.m. to 7 p.m. every week from mid-March until recently. She did all that the  province’s Department of Health required for businesses to reopen. She made sure she was doing everything right, according to the department’s guidelines.

“At that point,” she says, “I was just trying to keep the lights on.”

When the health department gave her the “okay,” she opened curbside and set up a table just outside her shop’s entrance.

Not only did she keep the lights on, she also “got found” by some new friends and customers along the way.

“Soon enough,” she says, “the word spread and people just started coming around.”

Some customers surprised her, telling her that before Covid-19, they weren’t even aware that she operated Grammy’s.

“People were just so tired of walking around in circles and being home all day,” says Kirby. “It was the highlight of their day and we soon became a destination. They were so thrilled to come and order a cup of coffee.”

Kirby says that period turned into the two best months for her business that she’d ever experienced to date, apart from Christmas.

“It also didn’t hurt that we also served a high-end coffee from Italy called Illy” she says, adding that the Italian-based coffee company, Illy, is a true pioneer of espresso.

Kirby laughs when asked about the origins of the name Grammy’s.

“I wanted a feeling in the store that was reminiscent of people’s youths, when we’re home sick from school or when we sometimes went to grandma’s house. I wanted that old feeling of nostalgia.”

Kirby notes that everyone who knows her own mother, knows her as “grammy,” so that was what she wanted to name her shop: Grammy’s.

“Grammy will likely be my name when I have grandchildren too some day,” says 48-year-old Kirby.

Kirby is happy to report that Wellesley recently experienced a nice surprise visit.

According to an August 6, 2020 story in the Woolwich Observer, (Provincial Finance Minister Rod Phillips,  Kitchener-Conestoga MPP Mike Harris, and Wellesley Mayor Joe Nowak met with Kirby and to discuss how the business has dealt with the corona virus pandemic, and what can be done to help businesses and the town move forward).

She not only hired her staff back but also plans to hire more people soon if business continues to show progress as it has since reopening.

“(Almost immediately) we started getting orders for gift baskets,” she says. “People are just looking for something to bring a little happiness back into their lives.”

The corporate side of the business has also picked up. One local bank, she says, recently ordered 45 gift baskets to be sent out to all their staff as a thank you. In normal times, her corporate gift basket customers number more than 24, and that number increases beyond 40 during the Christmas season.

Her average gift basket sales – whether through walk-ins or online – can even top 300-400 during the holiday season.

Kirby’s talent for putting gift baskets together comes naturally to her, she says, adding that she can whip up the perfect gift basket for any person, for any special occasion, based on the answers customers provide to a few simple question.

“Some long-time customers call and simply say, ‘You know what Sherrie, just do your thing like you did the last time.’”

“If I do something it’s not half-assed,” she laughs. “It’s all the way and that’s true of anything I touch in life. People say, ‘That’s just Sherrie.’”

Visit Grammy’s Boutique & Espresso Bar at 3700 Nafziger Rd, Wellesley, or on the web at