Every day is a busy day for MPP Belinda Karahalios, even in a pandemic, but she’s still making time for her constituents.

The MPP for Cambridge and the leader of the New Blue Party divides her days between her duties at Queen’s Park, spending time with her family — including helping her husband, Jim, who is currently battling cancer — and building the newest political party in Ontario.

“It’s a very interesting process. It’s pretty exciting, it is a lot of work,” she says.

After being booted from the PC caucus for voting against Bill 195 last July, Karahalios wasn’t sure she wanted to start her own party, but says the encouragement she received from her supporters convinced her otherwise.

“People are getting really upset with the established parties,” she said.

As part of the registration process, members of a new political party are required to get 1,000 signatures from residents showing their support for the idea. Karahalios says she doubled that requirement, collecting 2,000 signatures in a short period of time.

“It wasn’t something we were really keen on initially, but now it’s been quite a swell of support,” she said.

While building the party is taking effort, Karahalios says she’s still making time to listen to residents in her riding.

After the 2021 Ontario budget was released March 24, Karahalios has some concerns about how new infrastructure changes will affect those in Cambridge.

“We have a lot of beautiful green space, so we want to make sure we’re protecting that,” she said.

Karahalios is concerned that new infrastructure announced in the budget for broadband internet will unnecessarily damage green space and farm land in the area.

“Parents need reliable internet to do schooling. I can’t imagine how frustrating that is,” she said. “People do not want to give up the land, but people desire the broadband.” 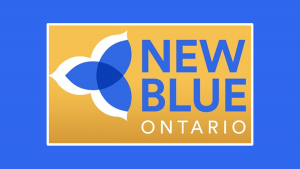 Karahalios says fighting these issues has gotten easier as the leader of a party, instead of sitting in the legislature as a independent member.

“As an independent you can’t get much done because you can’t really put political pressure on the government. I’ve done more as a New Blue Party member than as a PC caucus member.”

Karahalios says she was able to help put pressure on the government to remove items that felt like over-reach from bills before they passed.

Concerned about the implications on religious freedom, Karahalios pushed for the removal of a clause in Bill 213 that would have made it mandatory for those officiating marriages to comply with a code of conduct set out by the government.

Those changes are in line with the New Blue Party’s philosophy which values respect for individual rights, respect for business and respect for religion, she says.

“Most of the people that you talk to would say the PC Party is left of centre. People want to paint the Liberals as spend happy and they [the PCs] are spending more,” Karahalios said. “We’re going to build a centre-right party.”

Moving to the right of Doug Ford’s party would have meant a different set of priorities, including tax relief and less spending, in the last fiscal update Karahalios said, but before she can begin to think about crafting budgets, she needs to find candidates.

“The next step is to grow our riding association and find as many good candidates as we can.”

While the party hopes to run someone in all 124 ridings in next year’s election, Karahalios said she’s more concerned with getting people truly interested in running under the New Blue banner than putting just anyone in a seat.

“That’s always the goal. Whether or not that happens… I don’t want to be just appointing people. That’s the goal, we will see if we get there,” she said.

As a new party the next 12 months will be a fight for inclusion, as much as for an electoral win.

“We haven’t been included in any of the mainstream polls,” Karahalios said. She expects it will be a fight to be included in the debates as well.

“Having us participate in the debates would be helpful. It’s very challenging to get, we’d have to see what the rules are around that. I don’t know provincially what that’s going to look like.”

One of the biggest challenges Karahalios is gearing up to handle is the argument that another right-wing party will split the vote, making things harder for the PC Party.

“It’s really not the case,” she said. “We’re an actual conservative option and more options are good to have when it comes to voting.”

Letter to the Editor: G. Lesyk