Megan Campbell has spins on her mind and she’s hoping it’s something an Olympian can help her with.

The 11-year-old, part of the Star Skater program with the Ayr Skating Club, was excited when she was told the group would host two-time Olympic medalist and world champion figure skater Kaetlyn Osmond on March 24 to coach the group for an evening.

“I’m hoping to get some tips and tricks on how to do things better. I’m having trouble with my spins, so I was hoping that I could get tips on that,” Campbell said.

Currently attending school in Toronto, Osmond worked with the Star Skaters last month in an online fitness class with a question and answer period. Hitting the ice with the group was a further chance to help them with their skills, says club vice president Heather Simpson.

“This is the first opportunity they’ve had to have such a high level skater come into the club,” she said.

Simpson says the visit was arranged by club program coordinator Carolyn Allright, who has mentored and coached at all levels in figure skating and is a team leader for Skate Canada.

Allright “has been a tremendous asset to our club and has a lot of experience with the world of figure skating,” Simpson said. 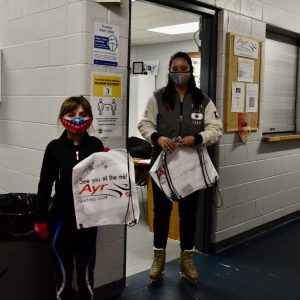 Emma Martin, 10, was excited to meet the Osmond, who hails from her family’s part of the country.

The harness is one of only three in Ontario that helps skaters to learn difficult moves and jumps while supporting them above the ice, helping to take the fear of falling out of learning.

“The first time I landed my axel it was in the harness. It was easier, you get better air. You can learn it better. I got it in the harness before I got it on land. It feels nice to land it because it’s a pretty hard thing to do,” said Martin.

Phoenix Coates, 11, has been skating with the group for eight years. Coates said she was excited to learn more about what it’s like to be a world champion skater.

“’I’ll probably ask her how she would lead a normal life after she competes worldwide,” Coates said.

In a year full of lockdowns, all competitions have been suspended except those that allow athletes to qualify for the Olympics, something that doesn’t include this group just yet. 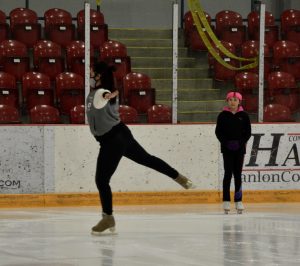 “Most of the skaters are young. I think the oldest skater we have is 14 or 15. We’ve got quite a number of years before our skaters are at that level,” Simpson said.

The skating club has been forced to cancel their annual gala two years in a row, something Simpson says has been tremendously disappointing for the team.

“This year we haven’t really been competing. I miss it,” said Maria Melnyk, 12 who uses skating as a way to express herself.

“My favourite part about skating is the freedom I feel. It gives me a safe space to express my feelings,” she said.

The evening with Osmond proved to be a great way to celebrate the 50th anniversary of the Ayr Skating Club.

Simpson said the club teamed up with Punks and Pretties in Ayr to provide the girls with gift bags signed by Osmond as a souvenir to remember their night.

“[They’ve] been amazing to work with and as a not for profit skating club we rely heavily on our local community and companies,” Simpson said. “We strive to keep our purchases local and have our team jackets made in Ayr as well as through School Tee.” 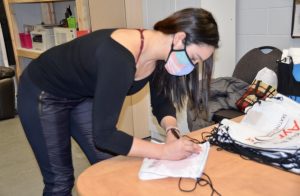 The club normally has dances to raise money to support activities and equipment, but this year those haven’t been possible.

While the season is coming to an end for this year, the team hopes that by the time they hit the ice again, they’ll be gearing up to compete.

“I just think figure skating is a supportive sport and it’s a great joy to have friends you can learn things from,” said Martin. “When you’re competing it’s just fun to know that even if you lose it’s still a fun experience. It’s about having fun.”

Beat the Heat and Kill the Chill

Local Programs Provide Hope for Victims of Abuse During the...