Mark Murray: The ‘Gentleman of New Hamburg’ Has Left the Building

Murray passed away on November 25, 2020 at Grand River Hospital, Kitchener at the age of 59 and to say he led a full life would be something of an understatement.

He served 28 years on the Wilmot Fire Department, New Hamburg Station, retiring as District Chief. He also served for eight years on Wilmot Township Council and was the third-generation owner of Murray’s Clothing and Footwear.

People who knew him or knew of him, all seem to share not only the same anecdotal evidence of Murray’s charitable soul, but also his mischievous smile and his joy at playing practical jokes on friends and neighbours alike.

The store itself became a hub of sorts – a place where friends and neighbours gathered for a visit or to share a story or a laugh – with Murray as the town’s pied piper of people. People were drawn to him, to his good nature, his laugh, and his gift for making people feel special.

At his funeral service, held at Mark Jutzi Funeral Home in New Hamburg on November 30, one friend of 30 years, Erik Kuttis, gave a heartfelt eulogy that began with some of Murray’s own final words from his hospital bed to his daughter Katie: “Don’t forget the till.”

“He wasn’t complaining; he wasn’t concerned about himself,” said Kuttis. “Mark did what he always did to make sure that everybody was ready to serve. He reminded Katie that his beloved store had to be ready.”

The announcement had already gone out that the iconic Murray’s Clothing and Footwear store would be closing after 68 years and he knew that things would be busy there and he wouldn’t be there to start the till.

Murray had spent his life in service to others, Kuttis said, whether at the store or as a firefighter, a councillor, a philanthropist, a friend, and most importantly, as a family man.

While others ran from danger, Mark ran towards it.

If a fatal car accident happened on the highway, he was there on the side of the road, holding a victim’s hand in their final, terrifying moments; or he was on the sidewalk consoling a devastated family as their home and possessions burned to the ground. After 28 years on the Fire Department, Kuttis said, Murray had seen it all, things no one should ever see but he always went home with it on his mind but the next day, “he got up and did it all over again.”

“When he retired, his next question was, ‘How can I serve?’” Kuttis recalled.

Kuttis recalled that he couldn’t count the times he was with Murray when his phone rang and someone either had a crack in their sidewalk or their garbage hadn’t been picked up, or the snow hadn’t been plowed.

“He got on the phone, and got to the bottom of it to have the job done right,” said Kuttis.

If there was one word Kuttis could use to describe his friend, it was simply that he was a “giver.”

Kuttis, who is the owner of TLC Pet Food in New Hamburg, said he couldn’t even pretend to know how many people or organizations Murray had helped through the years.

“I do know that at the store, exceptional discounts were given,” he said, “or accounts disappeared for those in need, and many friends were helped, including sports teams, service clubs, arts groups, community events, this church (Trinity Lutheran Church). I always admired Mark as a hugely successful businessman. He was the gentleman of New Hamburg.”

Murray was proud of his family’s heritage and the Murray name and when the difficult decision was made to close the store, said Kuttis, his biggest concern was for the town.

Murray was always at the store, Kuttis said, “and that was where the action was.”

“We worked together on campaigns and politics, business and Township matters but the best times were down at the store.”

Another fellow WTC councillor of Murray’s – Barrie Fisher – says Murray was “very passionate about what he did.” For council meetings, he says, Murray would always be the first one to arrive and the last one to leave.

It was the same deal with the store. 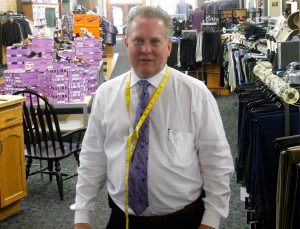 “If you ever popped in,” recalls Fisher, “he would always take time to talk to you.”

WTC Councillor Jeff Gerber also served with Murray but knew him well as a friend for about 10 years. He fondly recalls Murray’s sense of humour.

“He always enjoyed a good laugh,” says Gerber, adding that he knew everybody in town and what was going on around him. “He forgot more about New Hamburg than I’ll ever know.”

Gerber mentions an episode from the television sitcom Seinfeld, where George Constanza carried this bulky wallet around in his pocket, just as Murray did too.

“Mark had the biggest wallet,” says Gerber, “like, he had more notes and more pieces of paper and things that he’d pull out of his wallet.”

He also carried two phones – his council phone and his work phone, plus a pager for the Fire Department. He didn’t, however, put much stock in “modern electronics” per se, preferring human contact over email messages and whatnot. That’s exactly why he was at the store so much each day, Gerber says – to meet and talk with the people in person.

“He always had a notebook in his pocket and he always wrote things down in (it) just to keep track of everything and to follow up with everything.”

“He was a great asset on council,” says Gerber. “Whenever we were talking about an issue, he would always have an insight into it or a background into it.” 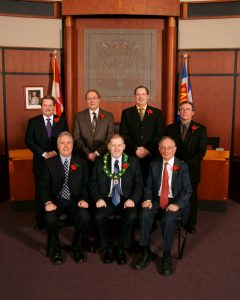 Murray’s passing, coupled with the closing of the store, he says, leaves many people who knew him feeling a deep personal sense of loss along with the empty space in downtown New Hamburg that was Murray’s Clothing and Footwear for more than six decades.

Katie has worked at the store for more than nine years now and currently she is swamped with running the business as it goes into “retirement” mode.

Murray’s Retirement Clearance Sale started on November 17 and will continue into the new year, offering “large (not-to-be-missed) discounts” on all their quality clothing. Store hours will also be extended during this time and are noted on their website at http://www.murraysclothing.ca/ .

Katie says the decision to close just felt like the right thing to do but at this point she’s unsure of what the future will bring for her own career aspirations.

As for her dad, she says the thing that she is most grateful for is that sense of work ethic he instilled in his children and his natural ability to make friends, and for anyone who may wonder, yes, Mark Murray was the real deal: the same guy behind closed doors with his family as the public persona he displayed throughout his life.

The “gentleman of New Hamburg” has left the building but, no, Katie didn’t forget the till; it’s open and ready to serve as always

If Winston Churchill was right, then Murray – “the giver” – made his entire life all about what he gave so, undoubtedly, he enjoyed a great life indeed.

Letter from the Publisher: A Year Like No Other