2020 marks the 75th anniversary of the end of WW2. Significant celebrations were planned for commemoration, but because of COVID-19, events have had to be planned in some other meaningful way to honour those who served and sacrificed for the freedom that we have today. 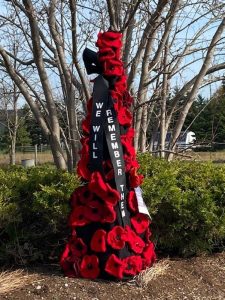 Beth Schlueter, of Wellesley, decided to take on a project as her way of remembering and so began to crochet red poppies. She figured that she would do 20 or so until her friend suggested that 75 would be a good number to commemorate the 75th anniversary. Beth was not deterred by this suggestion, but eagerly started to crochet with determination. She did send out the call to other crocheters and knitters of Wellesley Township who also agreeably started their needles clicking.

As a result, a display was finished and placed at the Linwood Cenotaph for Sunday, November 8, which is when the Elmira Legion had a small private ceremony in Linwood.

Article and Header Photo By Barb Nowak and Beth Schlueter