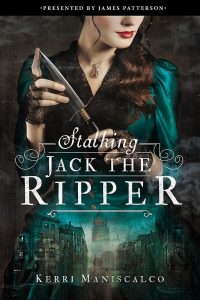 During 1888 the infamous Jack The Ripper stalked the streets of London, England. His massacre of five women remains unsolved causing many people to speculate what really happened. Kerri Maniscalo is one of many who has twisted the tragedy in her imagination for her debut novel, Stalking Jack The Ripper.

This novel follows Audrey Rose Wadsworth as she tries to unravel the mystery of the notorious killer. Living a life of privilege, Audrey is expected to become a proper young woman, but she instead finds her interests lying with the dead. She studies alongside her uncle, learning the skill of forensic medicine, which ultimately drags her into the gruesome investigation of Jack The Ripper.

This book was recommended to me by a coworker, and at first, I was hesitant. I had read a few historical fiction novels in the past and they weren’t my favourite type of book. However, I still gave it a shot and I’m so delighted that I did.

Stalking Jack The Ripper is not what you’d expect out of this genre. It surprised me with its fast action, well-developed characters, hints of romance, descriptive setting, and unbreakable mystery. Kerri Maniscalo does a beautiful job weaving her imagination with facts. While the story is her own, she is also informative about the original case, trying her best to stick as close to the well-known history as possible.

This book might seem scary to some because of the subject matter, but I highly encourage young adults to at least give it a shot. No matter how much it is described no words can do this novel justice. Only Maniscalo’s story can bewitch readers into adoring Audrey Rose’s narrative.

The Reading Corner – City of Ghosts