Regional Maple Syrup Output Down in 2021: But Local Sales are Brisk

The tapping season is over and Waterloo Region maple syrup producers are reporting a below average year.

“Yields are down,” said Kevin Snyder, president of the Waterloo-Wellington local, Ontario Maple Syrup Producers’ Association. Maple syrup production is down about 30 per cent from an average year at Snyder Heritage Farms in Bloomingdale.

“We have had bumper crops the past few years, so I’m not upset,” he said. One year, they were up to 40 per cent higher than an average. 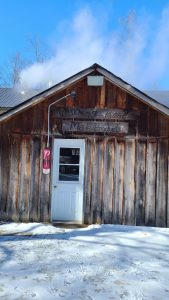 Dale Martin, an owner of Winding Road Maple Products in Elmira, said, it was not a great year and their production is down about 30 per cent as well. He has been producing maple syrup with business partner Paul Martin since 1992. In an average year, they usually produce 1.3 litres of syrup per tap, which totals approximately 24,500 litres. This year they produced 0.83 litres of syrup per tap and expect total output to be around 16,000 litres.

“Typically, 10 to 20 per cent of our yield is produced in February, but the cold prevented that this year,” said Martin.

Aaron Burkhart from Burkhart’s Maple Products in St. Clements said there was too much warm weather this year resulting in less sap. “It warmed up and stayed warm. That really set things back.” 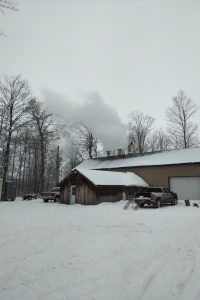 Sap production requires below freezing overnight temperatures and above freezing daytime temperatures. Overall, sap collection was down about 25 per cent this year. However, Burkhart is processing sap on behalf of friends and expect their maple syrup output to be similar to last year – around 5,000 litres.

Waterloo Region’s lower than average maple syrup season is consistent with the levels seen throughout Ontario. “The general consensus in the maple syrup community is people are down in their production and we have a darker syrup this year,” said John Williams, Executive Director of the Ontario Maple Syrup Producers’ Association.

Actual data for the 2021 maple syrup season will not be available from the Ontario Maple Syrup Producers’ Association until September and the Statistics Canada report will not be completed until around November, he said. 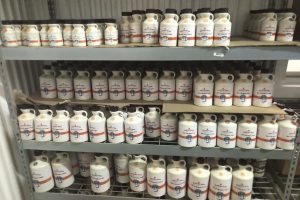 Each sugar bush is unique, so there are different reports, said Williams. “When we see the final numbers, I expect overall production to be down about 20 per cent in the province.”

Williams produces maple syrup in Simcoe Country and his overall yield is down about 40 per cent this year. The last two years have been quite good for syrup depending on where you are located, he said. There has not been a bad year since about 2012.

A lot of heat in March really affects production levels. When the weather is nice and has above seasonal temperatures, it is not good weather for maple producers. “When we hear people complaining about cold spring temperatures, that’s usually a good year for us,” said Williams.

Despite the pandemic, maple syrup producers in the region are reporting higher than usual sales. Burkhart wholesales maple syrup to local grocers including Schnurr’s Grocery Store in Linwood, Zehrs Country Market in Millbank, and Central Meat Market in Kitchener. 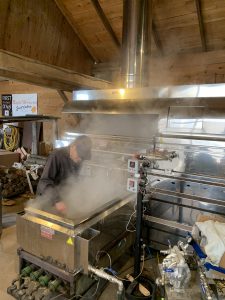 “Local grocers have been busier than ever and we sold more last year than ever before,” he said.

Snyder Heritage Farms is seeing a similar trend and report online sales on their website www.snyderheritagefarms.com have been positive. “Maple Syrup is a comfort food,” said Snyder. Since more people are home and cooking more than before, they’re purchasing more maple syrup. Sales have been up since the pandemic. “When you buy local, you support the local economy and the community recognizes that.”

Snyder has many long-time local customers and his business receives many new customers through referrals. “When you produce a good product, it sells itself,” he said.