WRPS announced the new design for cruiser 7537 March 29. The car is one of four specially designed vehicles set to be released this year.

The new design “aims to capture the spirit of Canadian newcomers, as well as African, Caribbean, South Asian, and Arabic cultures,” WRPS said in a press release.

WRPS says the vehicle wrap contains images of “a woman wearing a Gele (traditional Nigerian head wrap), a Sikh man, and a Muslim man and woman,” as well as a lion, the African baobab tree and various religious symbols.

“Each element featured in the designs is an opportunity to engage, connect, and educate our community,” said Bryan Larkin, Chief of Police. “All of our diversity design cruisers will have a QR code that community members can scan, which will provide more insight into the design featured on each unique vehicle.”

While the department says the vehicle is intended to reflect the diverse community in Waterloo Region and is just one aspect of an overall effort to reach out to marginalized community members, some are calling it tone deaf.

A petition with more than 2,500 signatures is circulating online in an effort to get the design removed from the vehicle. 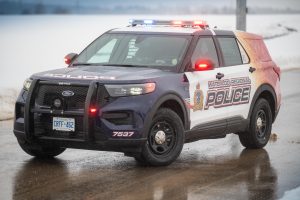 The petition says the vehicle shows the lack of understanding the WRPS has of the harm and violence police departments have inflicted on people in black and indigenous communities.

The writers of the petition also state that the idea of approaching a police vehicle to scan a QR code on the side of it may be unthinkable to groups that have been systematically harmed by police profiling and violence.

WRPS said the vehicle is part of a larger Equity, Inclusion and Diversity Strategic Plan which is measured in five pillars.

“One of those pillars, Total Community Engagement, includes engaging with the community to help build meaningful relationships with those we serve. The Community Cruiser Designs is one small part of that strategy,” said Constable André Johnson.

The vehicle will replace a similarly designed cruiser that represented the 2SLGBTQ+ community.

“The Equity, Inclusion and Diversity Unit was contacted by 2SLGBTQ+ members of our service who became aware that the PRIDE cruiser was coming to an end of its use,” Johnson said. “A proposal came forward that instead of replacing the cruiser directly, the team would work to create more inclusive designs, which depict a wider range of the diversity in Waterloo Region.”

Johnson says the designs were chosen in a variety of ways including consultations with the community, research into the types of events and celebrations that are held in the community and by reviewing the most recent Canada Census, with a focus on the region.

Each of the cruisers will also have an information and education card with them that features a picture of the design and information about the project to be given to members of the community that want to know more.

Letter from MP Bryan May