Dennis Baer says that if someone had told him 10 years ago to switch from his tried and true log-burning heating system to a Heizomat system, he would have thought they were crazy.

“I would have scowled, but it’s the best thing I ever did,” he said.

Baer is a local farmer who runs Vibrant Farms with his daughter Melissa. The pair raises certified organic grass-fed beef and runs a store selling their products in Baden, Ont.

Three years ago Baer bought-in on the German boiler system that used wood chips instead of cordwood to heat his property.

Heizomat Canada is run by Grant Rawcliffe and his wife Katharina in Breslau. The couple started selling the machines after being delighted with their own, which they had brought over from Europe.

Baer uses his to heat more than 11,000 square-feet of his property, including his store and his farm house.

“It’s got a fair job to do. I love it,” he said. “It saves me so much time. I don’t have to spend time getting logs from the bush and cutting them up. It saves me hours and hours.”

With the hardwood system Baer says he spent hundreds of hours a year preparing the wood and feeding the boiler. Now, maintaining the system takes him about 15 minutes every two weeks.

While Baer admits installing the new system was a cost he wasn’t initially sure he wanted to take on, the Heizomat has saved him thousands of dollars every year.

He estimates switching from hardwood to wood chips for heating saves him up to $5,000 per year in fuel costs, and estimates an additional $10,000 per year saved when he factors in his time. 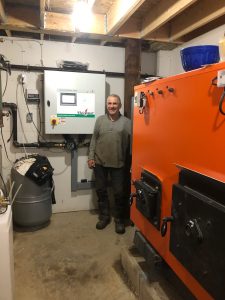 “For the most part farmers like me are stubborn, we’d rather spend the time because we think our time is free, but it’s not.”

Baer also saved money when installing the system by using the same building to store the wood chips that he previously used to store the cordwood. The new system fit easily onto his property.

An unexpected benefit of having the Heizomat is that the temperature remains consistent, something that didn’t happen with his old unit, he says.

“The temperature doesn’t change, everything stays the same temperature all the time,” he said. “It’s fully automated and constantly warm.”

Baer says his store staff appreciate the consistent temperatures too, especially with the cold snap that’s hit the area in recent weeks.

Baer says the system is also easy to maintain, with no creosote buildup and a computer system that alerts him if there’s ever an issue.

“Other systems, if something gets caught in there it’ll keep going and wreck the motor,” he said.

On the Heizomat system if a nail or other small piece of non-burnable material is ever caught in the system, the computer shuts it down and sends an alert to let the user know what’s going on.

“Our son has to maintain it and watch the computer system. It lets him know why it quits, if it does, and it doesn’t wreck anything,” Baer said. “It’s amazing.”

Baer says his only regret with the Heizomat system is that he didn’t buy one sooner.

“I’m serious when I say that it’s the best thing I ever did,” says Baer. “Bottom line is that I’m so overjoyed about this thing. It’s heavenly.”