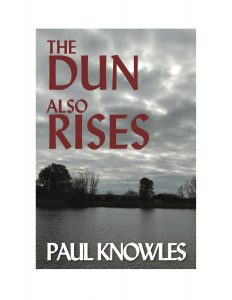 “The Dun Also Rises,” the second mystery novel featuring small-town newspaper owner Ed Brighton, is now available. The murder mystery, by Wilmot township author Paul Knowles, is a sequel to “Death on the Dun,” now in its second printing.

“The Dun Also Rises,” which Knowles admits is a deliberate pun on the iconic Ernest Hemingway title, again features Brighton, his partner, artist Kate McIntyre, their friend Chester Pringle and a large cast of small-town characters. The action is triggered when the Dun River floods, threatening the low-lying parts of the town… and that, it turns out, is the least of the problems faced by Brighton and his friends.

Knowles says that he wrote the sequel “because I feel such affection for the characters from the first book. They have taken on a life of their own, and a lot that happens in the book seems to arise from their own personalities and decisions, not from any manipulation of the plot on my part.”

Knowles, former editor and publisher of the New Hamburg Independent newspaper, and a life-long author and writer, admits that while the setting for the book may resemble “a town I know and love,” the characters are completely fictional, as is the plot line that pits Brighton against members of the town council and other local leaders.

One reader, who has read “Death on the Dun” and then “The Dun Also Rises” in manuscript, commented, “Your roster of characters is getting larger and more complex, a sign of a growing series. Well done.” Reviewer Jon Fear, writing about the first Brighton novel, stated, “The author’s candid observations and playful writing… hold your attention until the action heats up and the story races to a satisfying ending.”

Publication of “The Dun Also Rises” was supported by the Region of Waterloo Arts Fund. Both Ed Brighton murder mysteries, and “The Magic Garden,” are available from Paul Knowles (pknowles@golden.net).

Pet of the Week: Harvey

April 6th Was National Tartan Day: What are its Origins?