There is something uniquely timeless about a business that has been running like clockwork for ninety-three years.

Three generations ago, August Hartman opened the doors to Hartman Jewellers in Elmira in 1927 and thousands of clocks and pieces of jewellery later, his grandson Stephen Meyer runs the Elmira shop.

August Hartman was a watchmaker by trade, says Meyer, but like many watchmakers of his time, he also became a jeweller.

Meyer doesn’t really know where his grandfather learned his craft but he figures it must have something to do with his German bloodlines and their seemingly innate abilities in working with all things mechanical. He has a simple way of explaining the nature of clocks in general: “A clock is a machine that releases energy in an organized manner.”

“Well, my father’s name was Meyer and my mother’s name was Hartman, so we can’t get any more German than the two of those,” he says, laughing, adding that Germans are definitely detail-oriented, which is a good character trait to have in the business of repairing watches, clocks and fine pieces of jewellery.

Although August had two sons of his own, neither of them showed any interest in carrying on the jewellery business but Meyer’s Uncle Roy took up the mantle and got into the family business in 1954.

Meyer himself started at Hartman Jewellers in 1979 and bought the business from Uncle Roy in 1987, after learning his trade from Roy.

Meyer was just 20 years old when he first started working with his uncle, learning the craft.

“I (actually) never dreamt about getting into the jewellery business,” he says, “simply because I had an uncle in it.”

Meyer says that, until that point, it never occurred to him that he would get into this business, but he did eventually become a jeweller too, with a focus on learning how to restore and repair old clocks. 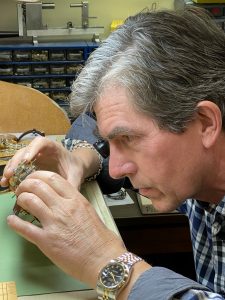 “That’s what I seem to have an affinity for,” he says. “For the first ten years that I worked for Uncle Roy I worked under him and learned how to repair clocks.”

Of course, once he had full ownership of the business himself, he had to focus more on the entire business – the repairing and restoring of all types of jewellery, watches, and clocks – so he couldn’t do as much clock repair as he would have liked.

“It’s only been in the last then years or so that I picked it up again because I just decided that it was something I really wanted to do,” Meyers says. “There seems to be quite a resurgence in the need for clock repairs now, mostly from younger people inheriting these clocks from their parents and grandparents. It’s all new to them, the idea of a mechanical clock or a mechanical machine to tell time. Many of them find it fascinating.”

To them, he says, it’s brand new even though it is obviously old technology.

Today, Meyer says he can fix pretty much any type of timepiece, from expensive watches to old floor clocks and grandfather clocks.

When asked if it is difficult work, he simply says, “Yes. I’ve repaired thousands of them and I still see different variations and different models that I’ve never seen before but, of course, they’re all based on the same principle.”

As time goes on, Meyer says, the feeling remains “extremely satisfying,” especially when a clock comes in that was in someone’s attic for three decades and he can bring it back to life:

“People love their clocks. They’re like a member of the family, especially if it’s an heirloom.”

Meyer is usually busier this time of year with the official ending of Daylight-Saving Time on November 1, especially with his many Mennonite customers and friends, who also must switch back to standard time with the rest of the world.

“They’ve always embraced mechanical clocks,” Meyer says, “because electricity is not encouraged. That’s sort of a tradition for them as well having a machine that doesn’t require electricity.”

As of now, Meyer has been doing dozens of calls weekly to get clocks back in running order around the townships. In fact, he fixes an average of about 200 clocks a year. As the community’s official ‘Doctor Time, he does make house calls and for some of the bigger clocks he takes “the movements” back to his shop at 31 Arthur St. S. in Elmira.

Hartman Jewellers does everything from jewellery restoration to repairs, watch repairs, battery changing in watches, and even designing and creating custom jewellery pieces from scratch. Usually, someone would come to them with an idea and so, they do some drawings or computer-assisted designs for them and from that they can create a new piece.

“One of the things that we’re doing a lot of now is remodelling or recreating peoples’ rings and jewellery into something different,” he says. “A lot of people are interested in that again. They might be pieces that were inherited and sometimes they are combined in order to make or consolidate pieces that might end up being one piece. It mostly has to do with inheritances.”

“For me, it’s like, the more I see, the more I learn; and I’m still seeing things. There were a lot of clocks and different variations of clocks that were manufactured in the last 300 years or so, mostly by the French, Germans and English.”

He’s never come across a clock he couldn’t fix, he says.

“Sure, I’ve come across some clocks that were just train wrecks and it wouldn’t make sense to repair them because it would be way too expensive, but I haven’t come across one yet that I haven’t been able to fix.”

Meyer’s wife of 29 years, Lisa Mulligan, has worked with her husband at Hartman Jewellers for the past 23 years. They have two children – a 26-year-old son and a 25-year-old daughter – both of whom live in Ottawa after attending Carleton University. Neither of the kids are interested in the jewellery business.

I Voiced My Objection to Bill 213