Tipsy Scarf: A Unique Boutique with Something for Everyone

Ayr – At first glance, the name Tipsy Scarf might seem rather whimsical.

Maybe that’s true, but the name means something to owner Christie Roth.

She named the new boutique as a humorous, but loving sentimental tribute to her late grandmother, Reta, who passed away in August 2018. Reta, it seems, enjoyed her “vino” and always wore fashionable scarves. Hence the name Tipsy Scarf Boutique was born.

Roth and her mom, Kim, shared many fond memories of numerous shopping excursions to Toronto with Reta.

“She was always very fashionable,” says Roth of her grandmother, “and she loved hair and makeup.”

“So,” she says, “we just combined the two and it became Tipsy Scarf Boutique. It was the three of us, always together and shopping.”

The idea for Tipsy Scarf was hatched during one such shopping trip between mom and daughter.

Kim is a silent partner in the new business at the moment, to help Christie and Jeff out with their daughter until she starts school in the fall. Roth knows her grandmother would be thrilled about the new boutique.

Reta was also great at knitting:

“Even growing up – as a little girl – I remember having sweaters and scarves and mitts that would be from my grandma.”

Roth opened Tipsy Scarf Boutique on August 1, and she also owns a hairstyling salon, called The Strand, in uptown Waterloo. 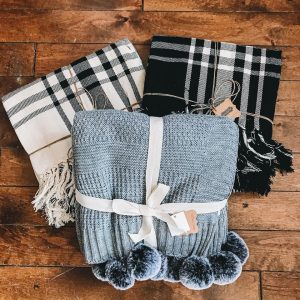 The Strand is a full-service hair and makeup salon, which also features aesthetics.

For Roth, the Covid-19 pandemic has been – ironically – a sort of double-edged sword.

She currently works at the salon once a week now – on Mondays –  but the salon is almost on autopilot nowadays because of Covid, which allows her to focus on Tipsy Scarf.

“My story is actually kind of crazy,” she says. “There have been so many reasons why I am where I am today; normally, if my dad were still here, I’d still just be doing hair all of the time; it’s my first love and (somehow), with these deaths that have happened in my family, it was like the push my mom and I needed to do something together.”

Besides that, it’s something she’s wanted to do her entire lifetime.

In May, she bought a house in Ayr.

As fate would have it, she also spotted an old banking building for lease just up the road from her new home – and signed a lease for the “beautiful” old building.

One by one, the building blocks of Roth’s next chapter in business started falling into place, beginning with a once-in-a-lifetime chance to go to New York City. 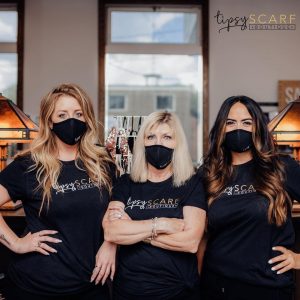 Roth took a course in Toronto in the summer of 2019 with the famed hairstylist, Aubrey Loots, and she ended up scoring an opportunity to spend a week at the New York Fashion Week, courtesy of an Aubrey Loots Backstage Pass.

Loots has an international reputation in the hairstyling and fashion worlds. He works LA, New York, and Paris Fashion Weeks and has led more than 150 runway shows and installations. He was also the Lead Stylist for all three seasons of “The Taste” on ABC Television with Nigella Lawson and Anthony Bourdain and was lead stylist for the entire 2014 Old Spice Campaign.

It was a unique and inspiring experience for Roth.

“I’ve always been kind of in love with hair, makeup, clothing and fashion – it all kind of goes together,” she says. “It helped me because it’s given me that clear vision of high fashion New York City.’

It’s also had a positive impact on Tipsy Scarf:

“We’re always looking ahead to trends and yes, definitely, it all goes kind of hand-in-hand.”

Roth describes Tipsy Scarf as a “lifestyle boutique,” that is as unique as its location. She didn’t want to change much of the interior for that reason, wanting to retain that “heritage feeling.” The main room of the boutique is located in the original bank vault, complete with massive vault doors.

Tipsy Scarf sells everything from the latest one-of-a-kind fashions to accessories, jewellery, candles, giftware, housewares and much more.

“It’s literally a good place to go to get any type of gift for any age range or personality,” she says, adding that they also carry men’s socks, boxer briefs and loungewear.

The best part, she says, has been the response from the community at large and she’s received only positive feedback from customers. One sure sign of that is the fact, she says, that no one has ever returned anything.

“It’s just a good feeling to know that we have something that people like,” she says.

Roth says Tipsy Scarf is the kind of store where customers regularly return because it is always adding new merchandise each week, so the store “basically, never looks the same twice.”

Roth wants her customers to feel like they are getting exclusive, one-of-a-kind items.

“I will have one of each size in the same colour, but I won’t carry mass quantities of one product because I want it to be chic and unique every time someone comes in,” she says. 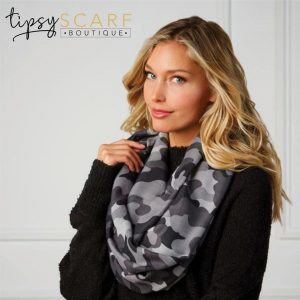 Although she prefers local suppliers, she does carry one prominent line – a personal long-time favourite of hers – from a popular brand called Free People, which she describes as a “higher-end line.” She’s shopped there herself for years, she knows the quality, and is confident her customers will appreciate it as well.

“When my mom and I decided to do this,” she says, “we wanted to carry all the things that we know and love.”

Covid-19, ironically, has presented Roth with an equal measure of challenges and opportunities.

For starters, The Strand salon was closed during the lockdown that started in March. That’s bad for business but it also meant Roth could now focus her time on getting Tipsy Scarf Boutique up and running.

Opening a new business during a pandemic is not without its share of hitches.

Roth had originally planned a wine and cheese grand opening, but it just didn’t have the same effect with social distancing and mask wearing guidelines in place.

“I had wanted to make it a little bit more extravagant and obviously, we had restrictions due to COVID-19,” she recalls, “but at the same time, I think everyone is in the same kind of mind-frame, that they’re just so thankful that things were open (again) and they were able to get out of the house and go shopping.”

Tipsy Scarf is just large enough, she says, to accommodate 10 customers at a time, while maintaining safe-distancing protocols.

Reta might have appreciated another piece of irony during Opening Day: they had no scarves:

“It’s so funny because when we opened, our scarf order hadn’t come in yet because a lot of (items) were back-ordered; shipping was a nightmare (then).”