St. Jacobs – Alas, the proverbial winter of our discontent has arrived and with the colder months, comes a new challenge for many business owners; but few seem to be taking the pandemic’s second wave on the chin like the restaurant industry.

On Friday, October 9, the Ford government announced a return to tougher pandemic restrictions in Toronto, Peel Region, and Ottawa after a steady spike in new coronavirus cases, and banned indoor dining, as well as setting limits on public indoor gatherings. Go to the Government website for details – https://covid-19.ontario.ca.

One St. Jacobs restaurant, Village Biergarten, has taken an innovative new approach in order to remain in business. It’s a revolutionary take on the dining experience and rest assured, many other restaurant owners are taking notice.

Rob Brown, Biergarten’s general manager said he did some research and came up with a solution: he installed eight domes for dining outside the restaurant, with each dome accommodating eight people.

“(The domes) are very popular in Europe,” Brown says. “It’s a way for them, in the colder months, to extend their outdoor patio season.”

Brown says he’s seen it done before in places like New York City and even in Florida where they have more than their share of rainy days.

“So, we just figured why not? We can do this,” he says, adding that the domes only take about an hour to build from a kit. 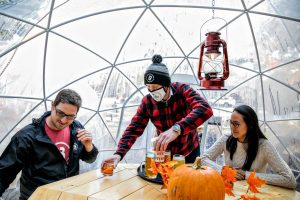 Brown describes the domes as similar to fishing huts, where a person’s body heat, coupled with the sun, can create a warming, greenhouse effect and diners are quite comfortable.

“Yes, it does get quite warm in there,” Brown says, recalling one previous night when they had people leaving the zippered doors open because it was too warm.

The domes sit on the Biergarten’s patio and each one is made of thick transparent plastic, has two “windows” that can open to let in fresh air, and has a 12.5 foot radius. Brown plans to build platforms for the domes and anchor them, to ensure they are stabilized in high winds during winter.

“I was a little worried there last week,” he says, “when we had that tornado warning, but they didn’t move at all.”

He also wants to ensure the domes are raised off the ground a bit in case the get some melting which, of course, would lead to big puddles inside the domes.

One of the coolest things about the domes, he says, is that when it does get snow on it and around it, the snow will also act as an insulator.

Brown says she spent a lot of time working closely with Public Health and the Fire Marshall’s office to make sure he got his stamp of approval on the plan.

“We’re going to do this right,” he says, “because there is no leniency when it comes to health and safety.”

Brown is dead serious about that:

“Yes, every single person who comes onto the property – and this is something that I’ve done, again, for safety purposes – whether you’re in a dome or inside the restaurant or simply on the patio, you will (have) to sign your name and contact information.”

Diners can only reserve a dome online – but if someone is not tech savvy, they can call the restaurant and they will get a direct line to Brown himself, as Brown intends to take a close, hands-on approach to the experiment from start to finish. When the finish might happen will depend, of course, on the pandemic. For now, Biergarten is under the dome for the duration.

The way it works is, for example: say you book a time for 2 p.m. on a Saturday; your time starts at 2 p.m. and that’s your reservation. You should get your food anywhere between 25 to 40 minutes depending on the size of your group and what you order. Either way, you should have an hour to enjoy your dinner and then drinks before your time is up.

There is a way around the time limit, however, depending on dome availability.

There are also rules regarding groups of co-workers who book domes. If you were to show up with the group, you are mandated to be in a particular bubble together at work, well, that’s your social bubble. Brown warns that diners cannot leave their domes to visit people – regardless of if they’re friends or acquaintances – in the next dome. 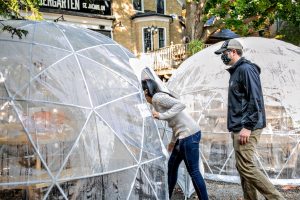 How to Reserve Your Spot Under the Dome

Reservations for the domes, so far, have been a resounding success.

There are some openings but as of last week, Brown says they were booked solid on Saturdays for the next three weeks:

“We already have some bookings for the New Year too” he says.

Heating the domes during the cold, winter months is a challenge and the plan to use electric heaters was nixed due to fire safety concerns.

“Currently, we’re brainstorming and coming up with another solution,” Brown says, adding they do have a possible working solution right now but doesn’t want to divulge that information just yet.

Rest assured, other restaurateurs are watching and waiting to see how the Biergarten will fare over the winter with the domes.

“I know that (they’re watching us) for a fact, yes,” Brown says, adding he had recently been on a Zoom meeting with Regional Health and Safety and other restaurateurs and owners in the area who wanted to have a chat about the project to learn more.

“I’m not keeping anything secret” he says.

Brown says he is keen to see the restaurant industry survive the pandemic and has no problem with sharing information, but safety is first and foremost and it is good for the entire industry to approach it that way:

“I just reiterated to them that if you’re going to do it, do it right and make sure you’re most concerned about safety.”

For more information on Village Biergarten or to reserve your bubble in the dome for dinner, visit https://the-village-biergarten.square.site/.